skip to main | skip to sidebar

"So, spill the beans" said Suzi to Jade
"Oh there's nothing much to tell" replied Jade with a wink
"Bullshit" said Molly, "We know you did it with him last night" said Molly
"Oh okay, yes I did it with him, and it was right good as well"
The three ladies giggled so much that Jade made a little damp patch in her Tenalady.
"Ooops" she said, adjusting the way she was sitting.
The three of them were sat in an opulent cafe on the outskirts of town. They often met up there after a night out to catch up on who Jade had done it with. She had really low self esteem and didn't really mind who she ended up with at the end of a night. Her weekly routine was the same, nightclub, chemist, night club, chemist. Routine made her feel safe.

"HOT CRUMPETS" shouted Irene from behind the counter, and Suzi put her hand up and shouted "over here"
"Too right" said Molly and the three of them collapsed into fits of laughter. It was like something out of Sex and the city, but less shit.

The girls started tucking into their mugs of tea and hot buttered crumpets and Jade began her sexy story.
"Well, first of all he bought me a drink at the bar, he seemed impressed that I enjoyed a pint of bitter and he made plenty of jokes about the head on it"
"He's a right laugh" said Suzi, a bit jealous that Toby picked Jade over her, she was drinking bitter as well, and she hated paying for them.
"Well, you know how I love bald heads and big arms?" giggled Jade
"Oh yeah we do" nodded Molly, "I know you've rubbed the ink off that Ross Kemp poster you dirty bastard"
"Well, Toby looks like him, but better, and he smells of Old Spice"
"He's lush", said Molly with butter dripping off her chin.
"Hurry up and get to the good bits, I think I had a bad pint last night and I need to go and empty my handbag... so to speak"  Suzi fancied herself as the Carrie of the group, because she had curly hair and a Mac.
"Okay okay, keep your pubes on. Well, after I finished my drink he led me by the hand into the men's toilets. He said he wasn't going into the girls loos, because they were poncy, and he can't get a stiffy when he sees sanitary towel dispensers. Anyway, I hitched my skirt up and he pulled down his jeans and he done me up the back one. I was ragging it so I didn't want to make a mess, and I didn't like to tell him because I didn't want to spoil the mood. He was so gentle"
Molly put her face in her hands and sighed, and she looked at Suzi they said almost together "Lucky bitch"
"You know, he said he'd love to do a three way" Said Jade to Molly. Molly looked over to Suzi and said "Why stop there?"
"Yeah, lets give him a four way" they all said together..
They got their calenders out to find a time they could all do when none of them were on the blob. 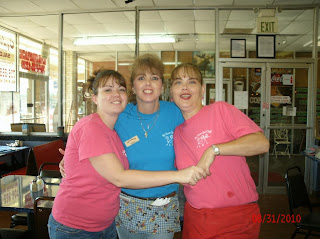